News from the ESB Italian chapter

The VII ESB-ITA Annual Meeting was held in Rome (28-29 September). The meeting comprised a Thematic Symposium on Ocular Biomechanics (abstracts published on Journal for Modeling in Ophthalmology) and a General Session “Biomechanics in Italy”. The meeting has been a great success, with >80 presentations (oral and poster), 100 delegates and 30% of foreign authors. Some contributions will be selected for a full-length paper to be published on Journal of Biomechanical Engineering (ASME). 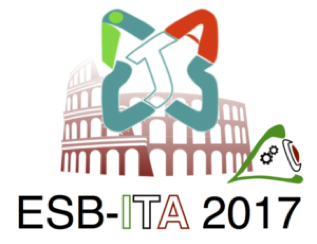 Four Prizes were awarded during the Annual Meeting:

During the General Assembly within the Annual Meeting, the executive board has been renewed. Michele Marino (Leibniz Universität Hannover) has been confirmed as President, while two new members enter the office: Simona Celi (Fondazione Toscana Gabriele Monasterio, Massa/Pisa) and Claudio Chiastra (Politecnico di Milano);

ESB-ITA has been appointed as co-organizer of the session in Biomechanics within the Sixth Meeting of the Italian National Group of Bioengineering (GNB 2018, Milan, 25-27 June 2018).

The Spanish National Chapter meeting was embedded within the 23rd congress of the European Society of Biomechanics, which took place at the Higher Technical School of Engineering of the University of Seville, from the 2nd to the 5th of July 2017.

Regarding the current activities, the Spanish CAP_ESB is involved in the application of The Spanish Network of Research in Biomechanics, which includes10 PIs of the CAP-ESB from 10 different Spanish institutions. The roll of Network is fundamental for the Spanish CAP-ESB since the network has supported the different meeting of the CAP-ESB, funding the travel costs for many participants.

News from the ESB Austrian Chapter

The second general assembly of the Austrian National Chapter was held in Innsbruck, on September 15 2017. The minutes can be found here.

It is planned to hold a scientific symposium of the Austrian National Chapter of the ESB in 2018 in Salzburg at the PMU hosted by Peter Augat.

The ESB 2019 conference will take place from July 7-10 2019 at the University of Vienna located centrally in the first district.