The Huiskes Medal for Biomechanics 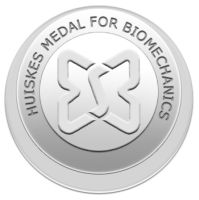 The Huiskes Medal for Biomechanics is an Award launched in 2012 by the ESB to honour the lifetime of service that Prof. Huiskes gave to biomechanics as a whole, and to the ESB in particular. This award will be given to senior researchers who have contributed significantly to biomechanics throughout their careers. The award is open to both members and non-members of the ESB, who must be nominated by at least two ESB members. The award includes a medal and certificate, as well as the costs of congress registration, travel and accommodation throughout the congress. The winner will be requested to provide an award keynote lecture at the ESB Congress.

Candidate nominations in consideration for the Huiskes Medal for Biomechanics should include a letter of nomination that highlights the candidate’s career achievements and contributions to biomechanics as well as a full publication list, to be submitted electronically to the Chairperson of the ESB Awards Committee.  For detailed information on the nomination and the selection procedure, please refer to the Awards Regulations.

The next round of nominations for this award will be in time for the ESB-2021 Congress in Milan. Deadline for receipt of these nominations is 1st December, 2020.

— Winners of the Huiskes Medal for Biomechanics —

Ralph received his doctoral degree at ETH Zürich in 1994. In 1996 he moved to Boston at the Harvard Medical School.  From 2000 he was first an SNF Professor of Bioengineering then Associate and Full Professor at ETH.  He has become internationally renowned for pioneering the use of desktop micro-computed tomography, and quantitative imaging to hierarchically assess skeletal structure-function relationships in mechanobiology and regenerative medicine. He was the first to measure 3D bone microstructures in patients in vivo, yielding important information not only on bone structures but also on how they age in humans and the functional consequences of these changes.  Not only are his approaches now used for precise phenotypic characterization of tissue response in mammalian genetics and mechanobiology, as well as tissue engineering and regenerative medicine, but the results of his research have led to a new and radical insight into the function, strength and temporal adaptation of bone tissues.  These findings have been ground breaking for understanding the role of age and degenerative diseases such as osteoporosis on mechanical failure of bone, which remains critical in the modern western world.

He served as a President of the European Society of Biomechanics (ESB) and of the Swiss Society for Biomedical Engineering (SSBE).

Roger’s scientific contributions to the field are reflected in more than 250 refereed publications with an h-index of 71. His studies over the past thirty-five years have addressed biomechanical, and more recently mechanobiological, issues in the respiratory, ocular and cardiovascular systems. More recently, his attention has focused on new areas, including the molecular mechanisms of cellular force sensation, cell population dynamics, and the development of new microfluidic platforms for the study of cell-cell and cell-matrix interactions. Roger has been a leader in bridging mechanics together with biology and chemistry: by exploring the ways in which single molecules transmit force through macromolecular networks and the resulting change in molecular binding or enzymatic activity. In addition to his research, Roger has served as an exemplary educator both in the classroom and in his laboratory. He has developed new courses for MIT students and co-authored textbooks on cytoskeletal mechanics and cellular mechanotransduction, helping to train a very large swath of future biomechanicians.

Roger’s contributions and impact in the biomechanics field are far-reaching. Recognition for Roger’s contribution is reflected in a number of awards and honours, including his election as Fellow to the AIMBE, ASME, BMES, AAAS and the IFMBE. He is also the 2010 recipient of the ASME Lissner Medal for lifetime achievements and is a member of the Institute of Medicine.

2013 – Professor John Currey, at the time of the Award was a retired (though still extremely active) Emeritus Professor at the University of York, UK, with a profound and fundamental contribution to basic bone biomechanics. John has been interested in the mechanics of hard tissue, particularly bone, throughout his academic career, although he spent some years, while mainly studying bone, examining the population genetics of the snail Cepaea. He can remember his exact position in the room with his hand on the door handle when the engineer whom he had been consulting, said ‘Why don’t you test it?’ He had up to that moment, being a zoologist, not thought of mechanical testing. He has shown various things about bone in relation to mineralisation, to pre-and post-yield behaviour, and with Peter Zioupos and Gwen Reilly popularised the study of microdamage.  His first degree being in  Zoology at Oxford he has always had a keen interest in the Darwinian aspects of hard tissue behaviour, for instance how do animals with, unpleasant incisor teeth like narwhals avoid hurting each other much.  Unlike last year’s winner he has not won many prizes, but he considers that his life has been well and interestingly spent!  He deceased on 18 December 2018.

2012 – Professor Georg Bergmann (Julius Wolff Institute, Charité – Universitätsmedizin Berlin, Germany). Prof. Bergmann has contributed a lifetime of dedication to the field of Biomechanics in which he has pioneered technologies to allow the in vivo measurement of joint contact forces. This data has been continually and openly shared with the entire biomechanics community free of change, and has therefore guided the design and development of countless implants and prostheses. Within his career, Georg has authored over 200 peer reviewed articles in internationally recognised journals, including the single most cited manuscript in the journal of Biomechanics. He has won numerous other awards, including the SM Perren award, ESB research award, Ceramtec award, German Spine Society award for Biomechanics, DGOOC award for basic science and Low-lands biomechanics award and AE research award. Georg played a key role on the council of the ESB, as a member from 1990-1994, as well as hosting the 1986 5th biennial ESB congress in Berlin.