Prizes and Honors Awarded at the ESB2015

The Huiskes Medal for Biomechanics is the ESB’s highest scientific tribute, presented in honour of Prof. R. Huiskes, and awarded to senior researchers who have contributed significantly to biomechanics throughout their careers. The ESB 2015 Huiskes Medal was presented to Prof. Roger Kamm, Cecil and Ida Green Distinguished Professor of Biological and Mechanical Engineering, M.I.T., Cambridge, MA.

Roger’s scientific contributions to the field are reflected in more than 250 refereed publications with an h-index of 71. His studies over the past thirty-five years have addressed biomechanical, and more recently mechanobiological, issues in the respiratory, ocular and cardiovascular systems. More recently, his attention has focused on new areas, including the molecular mechanisms of cellular force sensation, cell population dynamics, and the development of new microfluidic platforms for the study of cell-cell and cell-matrix interactions. Roger has been a leader in bridging mechanics together with biology and chemistry: by exploring the ways in which single molecules transmit force through macromolecular networks and the resulting change in molecular binding or enzymatic activity. 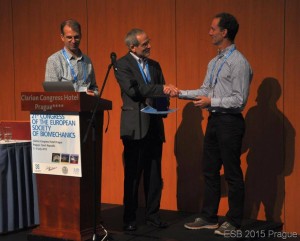 In addition to his research, Roger has served as an exemplary educator both in the classroom and in his laboratory. He has developed new courses for MIT students and co-authored textbooks on cytoskeletal mechanics and cellular mechanotransduction, helping to train a very large swath of future biomechanicians.

Roger’s contributions and impact in the biomechanics field are far-reaching. Recognition for Kamm’s contributions is reflected in a number of awards and honours, including his election as Fellow to the AIMBE, ASME, BMES, AAAS and the IFMBE. He is also the 2010 recipient of the ASME Lissner Medal for lifetime achievements and is a member of the Institute of Medicine.

Roger is a worthy winner of the ESB Huiskes Medal, and we would like to thank him for his award keynote lecture at the ESB Congress in Prague. 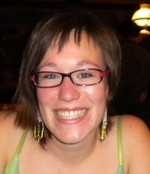 iogenesis. Moreover, the influence of oxygen on the behaviour of skeletal cells was also implemented. The multi-scale computational model was corroborated with previously published experimental results and an extensive sensitivity analysis was performed on the newly introduced parameters. Finally, the multi-scale model was applied to three cases of impaired bone healing, i.e. the occurrence of non-unions in critical size defects, bone graft healing in a compromised host environment and impaired healing of bone fractures in NF-1 patients. In conclusion, this PhD thesis demonstrates the potential of an integrative in vivo – in silico approach to advance the current understanding of bone regeneration as well as design effective treatments for complex orthopaedic conditions. The outcomes of her work include some 7 peer reviewed journal manuscripts and a number of awards, including the European Society of Biomechanics (ESB) Student Award 2012.

We would like to thank Aurélie for presenting her award keynote lecture at the ESB Congress in Prague.

The ESB is pleased to announce that the winner of the 2015 ESB Student Award was Janna Tenenbaum-Katan for her work entitled: “Respiratory flows during early childhood: in-silico and in-vitro biomimetic models of inhalation therapy in the developing airways”.

We would also like to acknowledge the excellent contributions from the runners-up Marios Georgiadis, Falk Mersmann, and Stefano Ugolini. 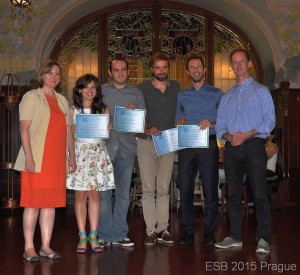 The purpose of the Travel Awards is to financially help young researchers to participate at the ESB Congress. The Award consists of a certificate and an amount of 400 €, which is expected to be used for travel, accommodation and living expenses during the ESB meeting. Winners of the ESB 2015 Travel Awards were as follows: 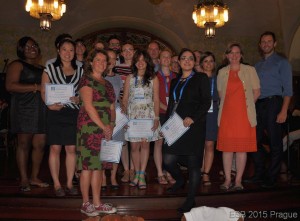 We are pleased to announce that the winner of the 2015 Best Poster Award was:

As you can all appreciate, the time and effort required for reviewing the extensive material submitted to these various awards is considerable. I would therefore like to personally thank all of the reviewers who have been involved in this year’s awards for making my task easy. There was very little convincing or chasing involved, and yet there has been fair and objective discussion in order to ensure the correct decisions. I am very grateful to you all.

Corporate members of the ESB: