The fifth meeting of the Spanish National Chapter (CAP-ESB) is being organized by Sergio Blanco, José María Goicolea, and Felipe Gabaldón, and will take place at the Civil Engineering Faculty of the Universidad Politécnica de Madrid, Spain, on 19-20 November 2015. The first day of the meeting continues to be dedicated to courses, while the scientific talks, round tables, and the CAP-ESB general assembly (GA) take place on the second day. This year, courses focus on the use of the image segmentation/visualization Slicer3D and of the finite element software FEBio. The meeting also continues to be committed to foment high quality science and make the latter available for clinical/technological exploitation, in a friendly and familiar ambience. During the GA, elections will take place to design a new Executive Committee. A call for candidates has already been announced. More information can be found on the Meeting web page 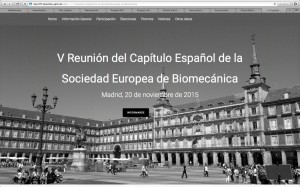 In this Newsletter, we would like to seize the opportunity to thank the Organizing Committee of the V Meeting of the CAP-ESB for beta testing the new software provided by the ESB for congress webpage, and abstract submission. Finally, in order to meet the CAP-ESB members and news on web, a Facebook group has been created in addition to the existing LinkedIn webpage: https://www.facebook.com/groups/548433221960960/

As the visibility of the CAP-ESB researchers is growing in Spain, efforts were undertaken to open the Chapter community to other societies, and to initiatives funded by the Spanish government. As result, the Spanish Network of Research in Biomechanics was created. Led by María Ángeles Pérez Anson from the Universidad de Zaragoza, the network includes, by rule, 10 PIs from 10 different Spanish institutions, distributed over the territory. The kick-off meeting took place at the Universidad de Zaragoza on June 1st 2015, and welcomed much more institution representatives than the limited number of representatives those that officially constitute the network.

This participation already points out the capability of the network to support the efforts of the CAP-ESB to federate the Spanish Biomechanics Community, and strengthen existing links among members. In particular, the Network provides funds for improved communication platforms, scientific meetings, and short stays in the member institutions. The V Meeting of the CAP-ESB will host the next meeting of the network, where specific actions will be defined.

Corporate members of the ESB: